If we want to update data, we notice that:

If we want to delete data, what if Mary doesn’t have a client anymore because she’s taking a year off? We are forced to either

When we have to treat with schema refinement we often notice that the main problem is redundancy. In order to identify schemas with such problems, we’ll introduce the notion of functional dependencies: a relationship that exists when one attribute uniquely determines another attribute. A functional dependency is simply a new type of constraint between two attributes.

Say that R is a relation with attributes X and Y, we say that there is a functional dependency X -> Y when Y is functionally dependent on X (where X is the determinant set and Y is the dependent attribute).

Let’s illustrate a scenario where the designer didn’t take in consideration dependencies between columns.

The following structure is considerably better:

How do we pass from one to the other? That’s what schema refinement does through functional dependencies.

A unique way to represent a student is through his studID. Each student has his own address, hence we can say that studID determines address. We’ll write this in the following way:

In the previous example, we actually have the following FDs:

Let’s have a look at the properties of functional dependencies in the case where X, Y and Z are attributes belonging to a table R :

The first 3 properties are called the Armstrong’s Axioms.

Let’s illustrate the usage of those properties with an example. If we have the following set of FDs, can we conclude that A - > H is logically implied?

Let’s see which properties are applicable to our case:

Which other dependencies are part of the closure?

Given a set of FDs, is there a faster way to compute if a dependency is logically implied?

Let’s see through an example how we can ask this question in multiple ways:

Before going on with a linear time algorithm, we notice that we’ve introduced a new notion, A+. We call A+ the attribute closure of A with respect to F and it will help us figure out if A - > E is logically implied.

We can generalize this into an algorithm:

Let’s go through an example again:

The algorithm is pretty simple: 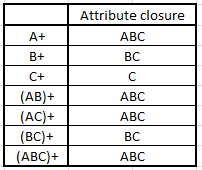 Let’s look at some examples

Functional dependencies can also be used to find all the candidate keys. By definition, a candidate key is a set of columns that can be uniquely used to identify a database record without any irrelevant/unrelated/superfluous data. It is a reduction of the entire collection of attributes, hence a minimization.

Since we are talking about a minimal subset, we can start with the complete set of attributes and then, following functional dependencies, minimize the set until we reach the candidate keys (a set of attributes that can not be reduced). Let’s illustrate this once more by an example.

We notice that functional dependencies help us structuring our tables around unique attributes, avoiding superfluous information.

Here is a short summary of DBMS : database management systems. Part of the motivation behind those little chapters is described in another blog post here. Introduction The Entity-Relationship Model The Relational Model Relational Algebra... Continue →