The entity-relationship model described in the previous lecture is a diagram. The main purpose is to clearly picture the constraints of the database to someone that is not necessarily coming from a computer science field.

The model that’s the most popular in Database Systems is the relational model: a representation of structuring data through relations between rows and columns. As seen in Lecture 1, relational database is composed by:

The schema of the database is defined by the DDL : data definition language. It is used mainly to create and destroy databases and databases objects. The main operations are :

As a practical example, we can have :

The last DDL that we’ll cover is the DROP operation: it removes the entire database objects from the Database System. 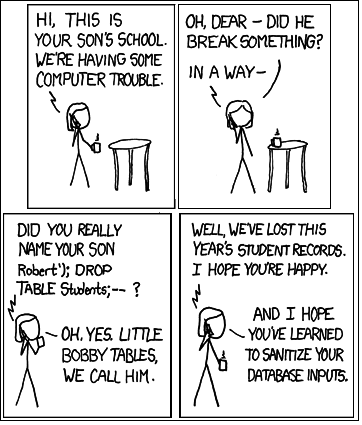 The Data Manipulation Language is used to manipulate data itself (vs Data Definition Language which is used to define data structures). It is incorporated most of the times in SQL databases. The main commands are :

Accessibility in terms of querying time is one of the main advantages of using the relational model. The most common tool for it is SQL : Structured Query Language. It covers both defining relations (DDL) and writing/querying data (DML).

While defining data in the relational model, it is important to notice that every attribute must have a data type. SQL, as any programming language, provides various data types :

This are 2 examples of using data types in SQL. Notice the fact that SQL is case sensitive, and also that we can attribute default values:

To manipulate data, we can show 3 examples:

We’ve already discussed constraints in the previous lecture. An integrity constraint ensures that changes made by authorized users do not result in a loss of data consistency. The designer specifies them when the DB is created and the DBMS checks if the condition is true when relations are modified. The domain definition is an example of integrity constraint.

A general example of an integrity constraint is the key declaration: a set of attributes forming a candidate key for the entity set. In a database, we can have 3 types of keys:

A candidate key is a set of columns allowing us to distinguish rows. It can uniquely identify a record without mentioning any other data. The attribute “First Name” won’t identify any record in a database of students. In this database, you can have Dan Crisan, but also Dan Smith. To make sure that you have the required row, the required student, you will also have to take a look at the “Last Name”. Hence, the combination “First name” + “Last name” is a candidate key.

Here are few similarities between candidate keys and primary keys:

To differentiate a candidate key from a primary key, we can notice that:

In addition of candidate keys and primary key, databases also have foreign keys: they refer to a primary key in another table. It’s a key to define the relationships between tables. Say we have a StudentEvent table where the primary key is the EventID. The personInCharge is actually storing studentID… which is the foreign key to the Student table. It defines the relationship between Student table and StudentEvent table.

In a scenario where we have Managers and Employees as different tables, referential integrity maintains the following 3 rules:

Now what are the steps to go from an entity-relationship model to the relational model?

1) From entity sets to relations: 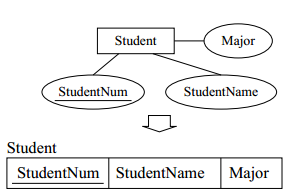 2) From weak entities to relations 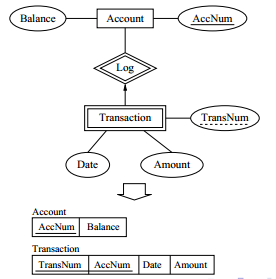 3) From relationship sets to relations (without constraints) 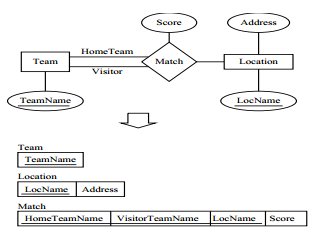 4) From ISA Hierarchies to relations

5) From aggregation to relations
*Remember that aggregation is a summary of our database: hence, we will have the primary key of each database and the descriptive attribute of the relationship between the relations (in this example : ssn, did, pid AND until). 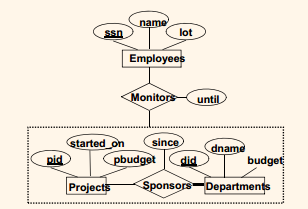 6A) From relationship sets to relations (with key constraints - METHOD 1)

6B) From relationship sets to relations (with key constraints - METHOD 2)

7) From relationship sets to relations (with key and participation constraints)

As a last word, referential integrity (consistency in data manipulation) is supported in SQL trough 4 options:

As an example, if we have 2 related databases Enrolled and Students, deleting the studID from one table will also delete the studID from the other table, if we mention ON DELETE CASCADE. This is done in order to preserve data consistency (referential integrity).

Now that we are done with the rules to translate ER to relational model, here is a quick summary of the relation model:

Constraints are there to impose restrictions on what data is allowed in the database. The basic E/R model introduces us to 2 types of constraints: KEYS Multiplicities The relational model allows us to be more flexible. It imposes bounds... Continue →