Now what can go wrong?

Let’s imagine a problem where 2 users reserve a seat for a flight:

Customer 1 will not be happy. This introduces the notion of serializability. There needs to be a concurrency control mechanism through a schedule.

A commit or an abort is mandatory in order to have a complete schedule.

A serial schedule is a schedule without interleavings: all operations are executed consecutively.

Conflicting operations are present in a schedule when those operations satisfy the following conditions:

The Write-Read Conflict, also called reading uncommitted data or dirty-read occurs when a transaction T2 tries to read a database object A, modified by a transaction T1 which hasn’t been committed. When T1 continues with its transaction, data of object A is inconsistent. The next picture helps illustrating the scenario: 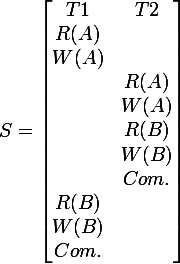 In other words, a dirty read is when a transaction is allowed to read data from a row that has been modified by another running transaction and that modification has not yet been committed. 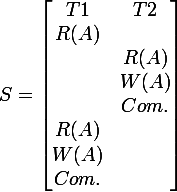 A real life example of this situation is when Bob and Alice are on Ticketmaster and they want to book tickets for a show. There is only one ticket left : Alice signs-in, finds that the ticket is expensive and takes the time to think about it… Bob signs-in and buys the ticket instantly and then logs off. Alice decides to buy the ticket and finds out that there are no tickets left.

The Write-Write Conflict, also called overwriting uncommitted data, occurs when there are lost updates. The attempt to make this scenario serial will always give two different results: either transaction T1’s version or transaction T2’s version. 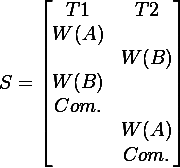 Once some concurrent transactions applied on a database, a schedule is serializable if the resulting database state is equivalent (equal) to the outcome of the same transactions, but executed sequentially, without overlapping in time. This is what we aim for. A schedule that is serializable can also be : 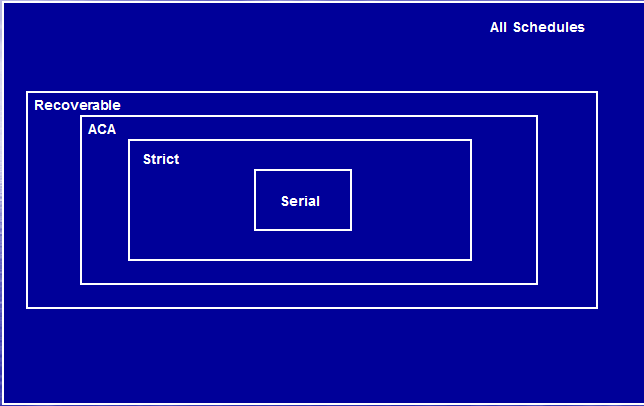 The best way to verify if a schedule is serializable is through a dependency graph.

To build a dependency graph we can follow this procedure:

Don’t forget to remove the edge that you just drew if you are actually aborting your transaction.

In order to have a serializable schedule, the dependency graph has to be acyclic (it doesn’t have any cycles, closed paths).

The following schedule is not serializable:

The following schedule is serializable:

Now how to know when a schedule is strict?

How to know when a schedule is avoiding cascading aborts?

How to know when a schedule is recoverable?

The point of enumerating all those schedule classes is to define some concurrency control : measures such that non-serializable execution can never happen.

Using the next common keywords will return a column with only one row. They are called aggregate functions: 1) COUNT 2) AVG 3) SUM 4) MIN/MAX 1) COUNT : returns the number of rows matching a specific criteria. SELECT COUNT * FROM Skaters... Continue →